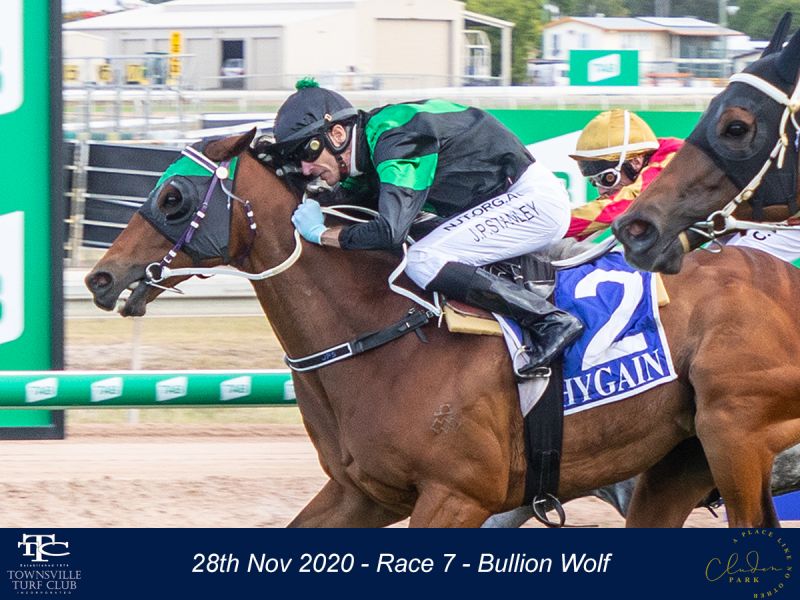 Classy galloper Bullion Wolf emerged as the home town hero after a heart-stopping win in the $50,000 Coral Coast Cup at Cluden Park on Saturday.

Gordy had to watch Bullion Wolf land the biggest win of his career from a Nebo mine where he works as an electrician.

“Fortunately we had reception and I could watch it with the boys. It was pretty exciting and I made a bit of noise when he won,” Gordy said.

“He’s been knocking on the door for a big race win. Although he was unproven at the mile I wasn’t stressed about it. He’s a half brother to Mighty Boss who won the Caulfield Guineas and I always had the opinion as an older horse he’d get the trip.

“He ran big races in the Cleveland Bay Hcp (5th) and was third to The Harovian in the Cairns Newmarket with 59kg so it was nice to get the monkey off the back with a big race win.

“He’ll go for a spell now and come back for the carnivals next year and if all goes well maybe a trip to Brisbane.”

Unproven at the mile and under 60.5kg, Bullion Wolf ground his way to a short head victory over fellow local Fortification to give Townsville a dream one, two result in Saturdays Cup.

Bold front-runner and race favourite Fly for Yulong held on for third a long head away in a tight finish.

“I was able to ride him for the first time in the qualifier and got to know him better,” Stanley said.

“That day he had to do a bit of work and I went a little early on him. Today although I would have preferred to be a pair further back I waited a bit longer before I went for him and he really toughed it out.”

The Jeff Caught trained Fortification flashed late and was an eye-catching second, following on from his big win in the qualifier.

Flying mare Bold Eos continued her love affair with Cluden Park after a tearaway win in the $50,000 Queen Of The Coast (1400m).

The Jared Wehlow-trained mare won the $100,000 Two-Year-Old Classic at her only other Townsville start in June last year.

Ridden superbly by Ryan Wiggins, Bold Eos jumped straight to the front and coasted to a four-and-a-quarter length win.

Wiggins turned in the ride of the day with a perfectly rated front running ride on stablemate Courtesy Bus in Hello Picnic Townsville Three-Year-Old (1300m).

Wehlow said Bold Eos could be a carnival contender in Townsville next year.

“She loves Townsville and if she keeps improving we’ll certainly look at something better for her here at carnival time,” Wehlow said.

“Ryan has ridden her in all four of her wins. It was great to get him to ride for us on a Saturday. His ride on Courtesy Bus was a beauty. He pulled their pants down.”