Cullen watched-on from grandstand as Chelsea lands him a double 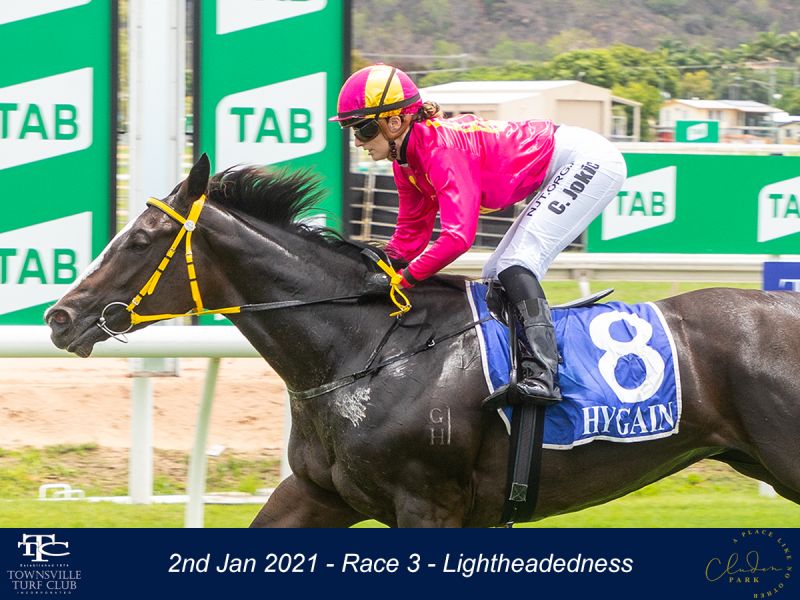 Sidelined dual licensee Peter Cullen combined with Cup-winning jockey Chelsea Jokic to deliver his best day as a trainer with a winning double at Cluden Park on Saturday 2 January.

Cullen, out with a shoulder injury, watched on as Jokic turned in a polished display to win on Lightheadedness in the Maiden Hcp (1000m) and later on Kentucky Flyer in the Benchmark 60 Hcp (1000m).

“It’s been a great day, definitely my best day as a trainer. Chelsea was great on both of them,” Cullen said.

“Lightheadedness is a nice filly that I think will go on.

“I just wanted to get her maiden win out of the way and send her for a spell. I’d like to bring her back for some of the better 3yo races later in the year.”

In contrast, Kentucky Flyer, originally bought as a Cleveland Bay Hcp horse, was plagued by a virus for almost a year and has been a headache to train.

“I had a lot of trouble finding the missing link with him. It turned out he won’t go at all with a tongue tie but will with a bit lifter, and he runs his best races for female jockeys,” Cullen said.

“Getting Chels[ea] to ride him has made a big difference. Something like four of his six wins were for women jockeys in Sydney.

“Chels[ea] watched some of his replays and did her homework and rode him a treat today.

“It’s her ride as long as she wants it.”

Cullen, now in the veteran class, said he had no intentions to stop riding just yet and hoped to be back in the saddle in a month’s time depending on a doctor’s report.

Black River trainer Troy Clive was in the winner’s stall at Cluden for the second successive meeting, this time with Jemadar.

Ridden by Cairns claiming apprentice Krysten Swaffer, Jemadar gained a late split to charge to victory in the Benchmark 65 Hcp (1609).