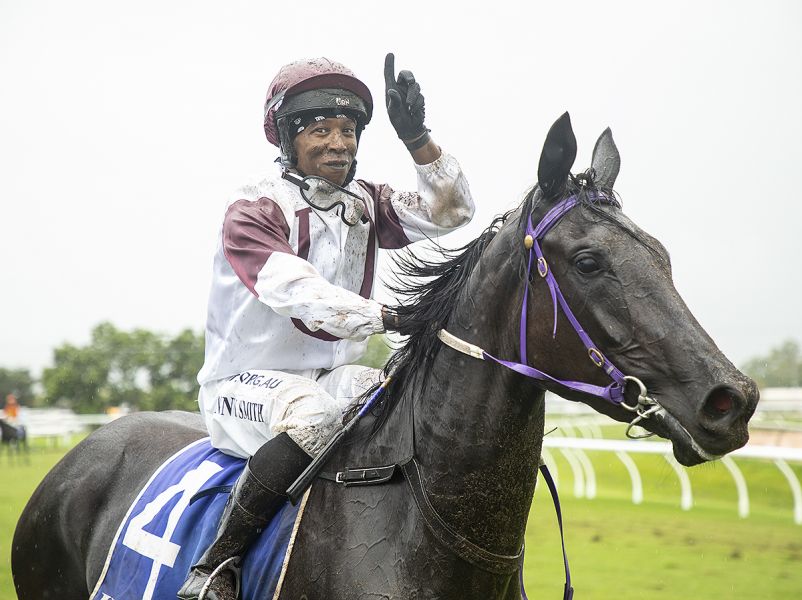 Unheralded filly Deadly Diva lived up to her illustrious lineage with a shock 100-1 win on a rain-soaked Cluden Park track on Friday.

Dismissed as a despised bolter by all but her connections, the little sister to Cleveland Bay Hcp champ Deadly Choices, revelled in the wet conditions to win the TAB App 3yo QTIS Maiden Hcp (1200m).

The win chalked up the second leg of a winning double for Wulguru trainer Tony Commerford who also won the other maiden with giveaway Potawatomi.

The prolific winning Deadly Choices, Deadly Day and now Deadly Diva have all won for the Commerford stable wearing the Hick colours.

“Deadly Diva came to me last year.  She was broken in late and she really knew nothing, but she’s always shown ability,” Commerford said.

“I had something on her, she wasn’t a 100-1 pop. She ran second in a jumpout and in her first race start over 1000m she was in that hot race won by Ruby July. It went that fast it would have won an open handicap.

“She was still on and off the bit (Friday) but she was in the right part of the track and was very strong at the finish.

“I’ll send her out for a month now.  I think she’ll be better over further so it was nice to win this one.”

Deadly Diva, with Denny Smith in the saddle, may have been a skinner for the bookies, but stablemate Potawatomi was a heavily backed winner.

The six-year-old ’s win provided a career highlight for stable strapper Hannah Willis who rode trackwork on the gelding in the south and was given the horse after she relocated to Townsville.

Potawatomi responded to a rails hugging ride by Bonnie Thomson to get home narrowly.

While Deadly Diva will spell, her famous big brother Deadly Choices is set to return to the stable late this week after recovering from surgery.

Deadly Choices’ career was in jeopardy late last year when his defense of the Queensland Country Cup title in Brisbane was aborted because of leg issues.

The big race specialist has since undergone surgery on both front joints to remove a bone chip and repair worn cartilage.

Commerford said the gelding had made a strong recovery.

"He spent five weeks in his box here to recover and then spelled at Damien Finter’s place in Mt Isa and he’s in great shape,” Commerford said.

“The bone chip was there before he won the Cleveland Bay and while we were monitoring it closely, at that stage it wasn’t troubling him.

“It got progressively worse when he went back out west and was racing there. After his last start here when he ran fourth with the big weight there was a chance he’d be retired.

“He’s had both joints cleaned up and it’s looking good. We’ll take it as it comes with him and look at the carnivals again but as long as he’s sound.”